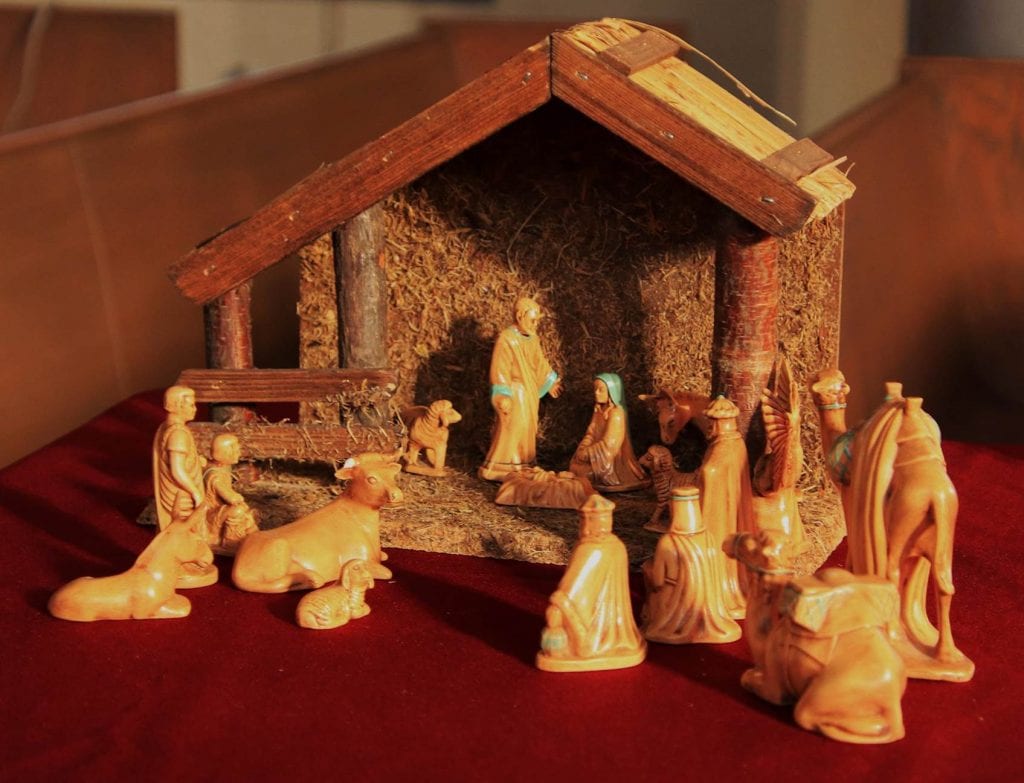 We’ve heard this tale already, a few times, in the past few weeks.
It is after all the “Reason for the Season”
Luke’s telling of the birth of the Christ child.
Some of us perhaps retell the story while we put up our crèche scenes.
We find a stable – or something that looks like one-
we line it with straw, and populate it with barn animals, a donkey, a cow,
setting the backdrop to the central tableau;
a manger, (no crib for a bed),
a woman and a protective man,
and the swaddled infant,
perhaps complete with halo.

And scattered about and above,
a star (not Luke’s),
an angel (not a heavenly army as Luke would want),
some shepherds, and their sheep.
(And not for today, because Luke doesn’t tell their tale, three magi with their camels).

What our manger scenes may not display however,is the dominance of Rome.
I’ve seen no manger scenes with Roman soldiers patrolling the back alley where this tale occurred,
no Syrian Governor Quirinius doing the dirty deeds for his “Augustan” Emperor,
safe in Rome, moving Palestinian pieces
like pawns on a chess board.

But I wish we did.
Because if we did, there’d be more of this this Christmas story
we’d recognize when we open tomorrow’s news feed,
when we watch the displacement or the forced unemployment
of millions because of the fiscal, or military, or geopolitical whims of the mighty.

When, on January 7, I wrap my infant Jesus up in the same yellow tissue paper that holds his kneeling mother, Mary,
I know I will remember swaddling my now grown children.I always do. I will ponder the life given, the faith grown,
the discipleship that they have made for themselves and their children.

When I wrap up the cow with the broken horn, I will think of the ways in which
life has its knocks and bumps and imperfections;
but horn or no horn, we all still have a place close to the miracle
of Christ’s birthing in the world.

When I wrap Joseph though,
I want to remember he is one of 68 million
people who are no longer welcome in their homeland,
who are forced to eke out some semblance of protection out of the “make-do” of temporary shelters.

And when I bubble-wrap with care my one broad-winged angel,
I want it to be the awe-filled care of one who has just been bowled over again
by the sheer fearful potency of his message;
God’s declaration that despite the reach of Augustus and his kind,
despite their attempts to control borders, colour and kinship,
and who is in and who is out, who is blessed and who is cursed,
there is indeed fearsome “Good News of Great Joy for all the people!”
born each and every day wherever a swaddled life is cherished,
and most especially, when life is born in places of desperate displacement, and fear.

And when I wrap my shepherds, I want to remember that they are not in fact superfluous to Luke’s telling of the tale, but that they are crucial to it.
For it was they who ran from the stable
and heralded with the human voice of wonder and praise, giddy, hysterical laughter, and irrepressible delight
in all that they had heard and seen of God’s glory and light,
God’s infinite might and strength,
swaddled in the tiny fragile flesh of a newborn mortal.

I want to be one of those shepherds
and herald God’s fearsome Good News
in a world that’s sick and tired of fake news.

All Hallows, All Blessed