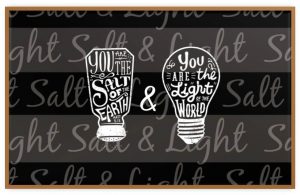 Perhaps you’ve not noticed this before,
but there aren’t many hymns, anthems,
not even much visual art to illustrate or expand
on Jesus’ first metaphor in this, his second lesson on the mountainside.
Salt seems not to be an easy word to rhyme, nor sing,
and it’s not particularly visually inspiring, or photogenic.
Perhaps we’re just less inspired by gritty, grainy, earthy, stingy salt
than we are by light.
Light, after all has a mesmeric quality to it,
the graphic contrasts between it and darkness – such a foil for artistic expression, spiritual experience.
But salt – we have to work harder to get to
wherever Jesus is going with this metaphor.

When I and my ministry colleagues were studying this text in our lectionary group a couple of weeks ago,
one of us took Jesus to task for his bit about salt losing its saltiness and being thrown to the ground, to be trodden on.
“Jesus never experienced a Montreal winter!
If it weren’t for salt being thrown to the ground regularly around here, most of us would be up slip creek!”
But that- for me- turned into a white rabbit, a midrashic gap,one I’d like us to mind this week.
Because Jesus on that mountain, in the greatest sermon in history,was picking his words carefully,
every one had meaning, significance.
ὑμεῖς ἐστὲ τὸ ἅλας τῆς γῆς
You are the salt of the earth.
Vous êtes le sel de la terre.

Okay so we’re salt, but what does that mean?
As we’ve already explored earlier, salt is life.
Your heart doesn’t beat without it,
your brain doesn’t receive signals from your body without it.
Salt in the ancient world was currency.
It made the difference between rotten and edible food.
It was essential. It is.
You are salt of the earth.
You are essential to the life of this earth.

Let’s follow Jesus here.
He talks about when salt loses its saltiness….
gets thrown on the ground….
Well, I did a bit salt mining into this;
When you’re harvesting salt, especially when you’re mining it
from rock, there is a process of sifting, sorting,
and the bits of rock and gravel that aren’t salt
are left aside, ground back into the earth.
Is that what Jesus meant?
I don’t think so…because here’s the thing….
salt doesn’t lose its saltiness.
And Jesus knew that.
And so did the people he was talking to.
At this point, they’re laughing because it’s ludicrous,
it’s as ludicrous as turning on the light,
and then scrambling to cover it up again.
You just don’t.

You are Blessed.
You are salt of the earth.
You are light.

Oh but, we, Churchy folk, we’ve moralized the heck out this.
Why must we turn every blessing from God into a moral imperative?
“You gotta be more salty, more lighty,
more humble, more poor in spirit, more meek…”
No!!!

You gotta see what Jesus sees as he’s looking at those in front of him.
Why must we put a frown on his face,
when all he was doing on that mountain
was being blown away by the beauty he saw in front of him?
People like me and you,
people far less privileged than you and me;
the poor in spirit, the mourning, the meek, the downtrodden,
the ones starving for some goodness and hope,
and in these in us he sees light!
He calls us salt of the earth!

Last week I heard this, you’ve probably read it,
“The world is a total mess.
A horrible mess, just horrible.”

No it’s not!
This world is not a horrible mess!
This world is beautiful, resilient, gracious, abundant,
it’s fierce and strong, stingy salty at times,
and we humans are pretty good at making a mess in it.
But the world of God’s making and keeping
is not a terrible, horrible place.
As Children of Light, as Salt of the earth
we know different.

For the love of God, and of the world,
don’t let those forces of darkness put a basket over your light…
Don’t let anybody tell you that you are not salt of the earth!
And if anyone dares to cast you aside,
as if you are bland, salt-less, worthless, useless,
then crack the ice!
season the soil, return to the earth and rebirth it!
When you see a gaping wound, cauterize it!
When someone else is thrown aside, cauterize their wounds!
Don’t let anybody tell you that you don’t have enough light to make a difference.
If you’re listening to this now, or on the website, if you’re having this read to you
in your hospital room,
You are light. You are salt!
One grain, one flame. You are!