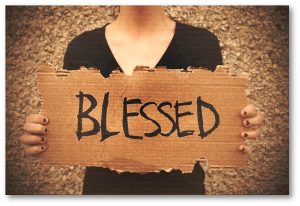 This text is so familiar to many of us,but as seems to happen with this Lively Word when it meets today, now, here,it somehow takes on new meaning and significance.

What strikes me most this time around, while we’re exploring through this worship series what it means to be recipients and messengers of God’s Great Invitation,
is that this is Jesus’ first chance to sit with those who’ve just accepted his daunting invitation to follow him.

It’s his first lecture if you will, the first day of Disciple School! And as everywhere, first lessons are important. They set the tone for everything that’s to come. The teacher thinks carefully about what they will say,and students, disciples, if they’re wise, will listen carefully for the first words from the teacher’s lips.

You already know what it is, Blessed, Heureux, afortunados, glückseelig..a blessedly difficult word,
a mysterious, metaphorical, abstract, overly Churchified, hashtagged kind of word that defies – as it should –
all our attempts at defining, or confining it.

As Alyson inhabited that moment on the mountain, I don’t know about you, but I began to sense that rather than a curriculum, an agenda, or a 10 point strategy for Discipleship, the first thing Jesus does is cast before
his newfound invitees, a vision, a God-Dream.
The poetic rhythm, the repetition, – nine times – of that one word “Blessed,” each time grows the word, expands its possibilities, anchors the word like an ear-worm into our being, so that, from newborn to death’s door, we can repeat in our soul what it is that God sees in us;
“I am a child of God a glimpse of a new creation.”
Blessed.
Touched by God.
Seen by God.
Blessed.

However, this is not all. If we really listen to Jesus’ first words, they are mystifying, confusing,
and even disturbing, because the poetic repetition
is utterly paradoxical, and impossible. A litany of failure and disaster, in that God’s blessing, God’s touch lands on those caught
on the wrong side of worldly success,
on the wrong side of borders,
on those who are suffering the worst of the ugliness that be-nights society.
God’s blessedness, according to Jesus,
touches those whose spirits have been robbed,
whose bodies have been bruised, beaten,
touches those who are weary with hunger and thirst
for right, truth, love, justice.
God’s blessing touches
those who are being ridiculed and persecuted
for trying to give shelter to the stranger, the widow,
the alien, the sick.

This vision of blessedness, despite the indicative verb-tense, is not a photo of the world as we see it, but rather it’s a glimpse of the new creation God invites us to be part of in the world. That’s the Great Invitation. And that’s why, as I said last week, it’s so daunting!

Alison, Mike, Tim, Megan, you’ve taken on a daunting role
on behalf of your children, as you accepted God’s invitation to raise Theo and Vivian as followers of Jesus. And those of us sitting here, pledging our community’s support to you, it’s no less daunting for us.

We, mostly privileged, mostly white, mostly too young to have lived through war, mostly too first world to have known hunger, or outright oppression, are suddenly facing a world we don’t recognize.
We don’t know how to wear the name Christian anymore,
especially when others are using it as an excuse to close borders, bar access to healthcare, to constrain human rights, and worse. We don’t know much of what it feels like to be among those blessed for being “reviled and persecuted” for the sake of living God’s Dream, but I’m pretty certain we’re going to find out soon enough.

And this is where this vision, this first lesson from Jesus, his great invitation, comes in;
“Come, see this poor, fear-filled world 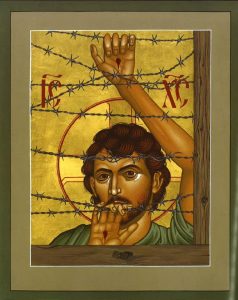 through God’s lenses;
as a place of blessedness precisely where the world curses it.
“Come and follow” Jesus, into this saddened, care-worn worldand be found in it, alongside him. Here. (Icon of Christ of Maryknoll)

I’d like to invite us all to take a moment
to pause in silence, and first let Jesus’ first lesson
sink in to our souls that we are, each of us,
children of God,
glimpses of God’s new creation,
blessed most where we are most broken.
………

And now listen for God’s invitation to each of us,
and to this community of daunted disciples;
For whom, where in your life,
is God inviting you to declare God’s blessing,
to be God’s blessing?
An individual who is poor in spirit, mourning?
A group who is being persecuted?
Is there an action of blessing,
of humility or peacemaking
or justice building to which God is calling you?
Us?
Let God write both the blessing and the invitation
upon your hearts.

In the Hall following worship, there will be a Blessed Board upon which you can post your response.