Epiphany 7:The place where God dwells. 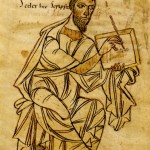 As usual, Paul manages to pack a lot into very few verses. He’s taken us imaginatively into the world of construction to make a point about the foundations upon which communities of Christian discipleship should be. (Any resident of Quebec reading this passage should be forgiven for reading this with anything other than cynical suspicion about what can go wrong in the construction industry!).

In the middle of this extended metaphor about the church as a building, he says

“Do you not know that you are God’s temple and that the Spirit of God dwells in you?”

I suspect quite a few readers of this blog  will have heard something like this reference before – “Your body is a temple of the Holy Spirit” – usually used to cajole us into not eating the fourth chocolate, or an appetizer AND dessert,  but that’s a quote from later in Paul’s letter to Corinth, and has quite a different meaning than what’s intended here.

To the Corinthian community, the question “Don’t you know YOU’re God’s Temple” would have been a smack between the eyes. Corinth had more than its fair share of temples, to gods, goddesses, emperors and the like.

All sorts of ‘stuff’ went on in those temples – sacrifices, offerings to appease this or that God, feasts and festivals, and… well, so on…(!) The members of this Community who were Jewish also knew fine well that  the Temple was in Jerusalem.  Inside this Temple was the inner sanctum – the Holy of Holies, understood by  the Jewish faith of Paul’s day to be the dwelling place for God. So holy was God, and so holy was this space, that no human ever entered it except on one day of the year (Yom Kippur), and then it was only one man, the high priest who was allowed to enter.

So, picture the sudden crick of the neck among Paul’s listeners when he asks them this question.  “What?! Come again??  A temple where the One true God dwells? There’s only one,  Paul, and it’s not in Corinth!”  But that’s what Paul is saying.   This community is the dwelling place – the temple if you will – where God’s holiness resides.  An awesome statement in any generation.  It pushes us to ask “So who is God that God chooses to dwell not in a golden sanctuary, but in the midst of human community?” “Who are we that God will choose to dwell with us?”

All through the Bible we have a building picture of a God who is decidedly different from the many religious options, of Ancient Egypt, Ancient Greece, Ancient Babylon, Persia, Asia Minor… Ancient Rome. Unlike many of these other gods, who tended to keep to themselves or to use humans and creation as dispensable playthings, this God of Abraham and Sarah, of Jesus and Paul, is a God who creates a humanity for partnership with God in creating and restoring justice and harmony for all creation. Moreover, this God chose Abraham’s people as a nation of blessing, and from among them he chose judges, prophets, shepherds, and ultimately the child of Mary of Nazareth to be God’s living, and reconciling and healing presence presence in the world.  As heirs to the resurrected life of Jesus, the communities of Corinth, Ephesus, Rome, Thessalonika, and of Antioch, Rome, London, Geneva, and even Pointe Claire, also get to be the place where God chooses to live out God’s presence in the world.

We get to be “God’s Temple!” Not just  because we have  a building with a great green roof, with a snazzy website, and great people and super kids, and awesome programming, we get to be one among many many places where the Spirit of God dwells because that’s the way God gets to be present in the world.

Just in case that sounds overwhelming,  or just in case we get a bit cocky, one last thought from the pen of Paul. Just before he asked the Corinthians “Do you know you are God’s Temple?” he  reminded them that they were a bunch of rag-tag, very ordinary people, with ordinary human foibles as well as talents. He’s flip-flopped for two chapters between praising them for being ‘the saints’ filled with all manner of gifts, and criticizing them for their tendency to factionalism, or to laziness.  In short, ordinary people we would recognize on any street, snow covered or otherwise.  And it’s ordinary people – not superheroes, that God chooses for God’s dwelling place.  That’s a promise.

And another short piece for further reflection on this notion of being a temple for the holy, read this short piece from the holy scriptures of Hinduism.  Thoughts, reflections, responses are always welcome, either here, or by email.

The rich build temples to Shiva,
What shall I, a poor man, do?
O my Lord! my legs are the pillars,
My torso, the shrine,
And my head, the golden pinnacle!
Things standing shall fall,
But the moving ever shall stay!

Earlier today Elizabeth sent out a message with this line:

Three messages today, from Martha, Rebecca and Elizabeth. (Test your knowledge: can you identify those women in the Bible?!)

Now there’s the challenge!!!  This is our perfect opportunity to find these three ( or more?!!) ladies in Scripture, and see what we can come up with about them.   I’m inviting you to add a comment with what you’ve found out, and then we’ll add more fascinating tidbits to the mix.

A clue to get you started, one in the Old Testament, two in the New……

What a great way to join in with the Women’s Group’s Sessions on Uppity Women of the Bible!

Epiphany 4: The foolishness to the wise….

Take a look at this passage :

For the message about the cross is foolishness to those who are perishing,
‘but to us who are being saved it is the power of God.
For it is written,
‘I will destroy the wisdom of the wise,
and the discernment of the discerning I will thwart.’
Where is the one who is wise?
Where is the scribe? Where is the debater of this age?
Has not God made foolish the wisdom of the world?
For since, in the wisdom of God, the world did not know
God through wisdom, God decided,
through the foolishness of our proclamation, to save those who believe.
For Jews demand signs and Greeks desire wisdom,
but we proclaim Christ crucified,
a stumbling-block to Jews and foolishness to Gentiles,
but to those who are the called, both Jews and Greeks,
Christ the power of God and the wisdom of God.
For God’s foolishness is wiser than human wisdom,
and God’s weakness is stronger than human strength.  (1 Corinthians 1:18-25)

When you read this passage you are reading “pure Paul”. Paul was a man schooled and skilled in classical rhetoric – the ability to ‘play with words’, particularly the setting up of contrasts and paradoxes. This passage is a supreme example, in which Paul takes predictable definitions of wisdom and foolishness, and turns them upside down. It’s easy to get lost in the abstractness of this passage while trying to follow his Snakes and Ladders route through wisdom/folly, but his point is at heart quite simple : The Jesus Story – and particularly the bit about the Cross – makes no sense to the sensible.

Yes, that’s right. The Jesus story makes no sense. It defies 1st century categories of ‘common sense’ or ‘intelligent wisdom’, and it still does in our century. Paul insists that the Cross of Jesus is the crux – literally – of God’s healing and reconciling relationship with humanity. And reading that sentence doesn’t ‘make sense’ does it? As one commentary on Paul puts it “the cross was a lousy marketing tool in the1st century world.” Agreed. It’s no better in the 21st century either.

No amount of philosophical wisdom, theological education, innate Mensa-like intelligence is going to make the story of the cross of Jesus ‘sensible’.  The Christian faith is centred on this story of God loving the world so much that God becomes physically enfleshed in our world in Jesus, an itinerant carpenter / teacher, who is executed by Rome for disturbing the status quo with his message of the Kingdom of God. God Crucified makes no sense.  Those of us who are tempted to make it so, says Paul, are barking up the wrong tree. We will be laughed at by the sensible who will tell us “believing in a God who loses makes no sense.” And ultimately we will fail, at the level of logic, to make this awful cross seem anything like good news.

And yet…. Paul says,  to “those who are being saved it is the power of God.” Well there’s a mouth-full! “Being saved” is such loaded language these days, and “power of God” isn’t that much better.  To me, ‘being saved’ needs to be seen in the context of God’s love. What might this phrase mean to someone who, in the midst of tremendous anxiety over the illness of a parent, or a child? When the community gathers, to pray, to provide rides to the nursing home, to look after the other kids, to festoon the doorstep with casseroles, to offer a hug, and a wordless tear of empathy,  I wonder if that’s when the anxious one experiences the ‘saving’ presence of the love of God coming so close that the experience of human suffering is known and shared with this Crucified One, who is the very expression of the intimate – and saving – love of God.   Does that make sense to the head? Probably not, but as I write this, and as I think of the times when I have experienced it in my times of turmoil, I KNOW  I can feel (sense)  in my heart and soul ……..holy wisdom that defies wise foolishness……

What do you think??  To leave a comment, click on the tiny “comments” just below, and it will open a reply box for you.