This sermon was preached at the end of the summer in a summer preaching series called “God in Between.”  It became the basis for another sermon on the same text in mid-November. 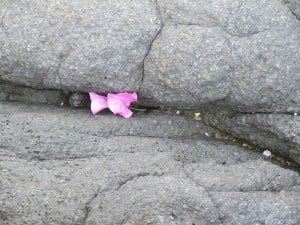 God: Between Rocks and Hard Places     (Luke 21:5-19)
Seated, teaching, is Jesus.
But have we heard what he said?
We, as in those who wear his name,
comfortably or otherwise,we fundamentally, or evangelically, or liberally named followers of this Jesus?
I wonder, did we watch his lips shape the words,
but not hear them?
“When you hear of wars, and rebellions,
earthquakes, disasters, disease, terror plots….
do not be alarmed.”
It seems to me that far too often those who wear his name,are precisely those who drum up the fear, the alarm! But didn’t he say some of us would?
“Many will come in my name, saying ‘I’m the one, now is the time!’”
We know them: the ones who traffic others’ terror,
the ones who blatantly read the political tea leaves
as a sign of divine impending wrath, when he said no such thing!
But we, do we hear what he said?
“Don’t be alarmed.
Don’t be deceived.”
Oh, Jesus, that’s easier said, than heard!
We are too on edge.  We too live in an ugly world,
everything you talked about is happening now.
War, earthquake, disaster, disease, corruption,
vainglorious self-serving elevated to alarming political
proportions,where the stakes are globally high.
Pipe bombs and truck bombs kill those who wear your name,
and no name, for no good reason,
and for the life of us,we are now begging you,tell us,
Where is God in between all this?
Your “Don’t be alarmed. Don’t be deceived.”
Don’t feel like the answers we need.
Back in June, while I was on study leave in St Paul,
Minnesota, just after the gay nightclub shootings in Orlando,
just as the horrifying spate of racially motivated killing
was erupting all around the US, I wrote on this blog , perhaps too glibly,
that despite all this gunmetal grey ugly mayhem,
“God does have a Dream, a future for creation, and
for us, as God’s people called to be blessing in it.”
I wrote that because I believe it, and I need to believe it.
But it was not convincing to one reader,  who wrote back to me (and I have their permission to share)
“I don’t think God has a dream. In fact I’m feeling less
certain every day that God even cares about us… I
don’t see the evidence – just a world wallowing in
despair, hatred, cruelty, selfishness, corruption…Maybe God has wandered off to another
creation….”
For this person, and for many, God is nowhere to be found
between these rocks and hard places.  Evidence suggests
we’re on our own.

I struggled long and hard with how to frame a helpful,
faithful response.
I needed to read this Gospel.
I needed to sit at Jesus’ feet.
I needed to listen, to let those shaped words
get past my ears, my head, to sink into my soul.
And until I did, I’d never noticed this:
that as Jesus points to a Temple
that was indeed crushed to rubble,
as Jesus points to a world Hell-bent, then and now,
he did not point to God in between,
he did not rush to God’s defence, (as I had done),
he did not try to answer the  unanswerable problem
of God’s supposed goodness and human suffering,
he pointed right back to us.
There then. Here now, and said (I’m paraphrasing, obviously!)
“When all of this happens… and it has and it will,
and it will continue to happen…I invite you to do three things.
First,”Don’t be alarmed.”
……. You know how much work it takes not to be
frightened? (image of a frightened first time mother in
labour, who knows that being alarmed won’t help!)
We know that to practise non-alarm, non-worry, non-fear,
that sort of non-violent, non-fearful response
to fearful, violent times
is hard, disciplined, spiritual work.
It takes prayer,
it takes presence,
it takes practice,
it takes community supporting one another
to be not-alarmed.
The second invitation Jesus gives
is for when the fear-mongers fill our newsfeeds,
when the alarmists seduce us with their weapons of mass defence,
for when we are told “the sky is falling!”
“the church is dying!”
He says, “Don’t be deceived by these messengers of doom,
and don’t follow.”

This is a practice of resistance; resisting the urge to act out
of fear, or hatred, or despair.
It is also a practice of honesty.
The truth is, despite war, earthquake, famine, disease,
corruption, decay, despair,
life is born again, and again;
love erupts across the planet far more frequently than lava
flows from volcanos,
courage creeps out from the craters of ruin all the time.
The practice of honesty, the defiance of deception,
the refusal to waste precious energy on fear,
is to hold onto and hold out for others to see,
this truth: Life and Love win.
Which brings us to the third invitation
that Jesus offers:
“When hell is knocking on your doors,
This is your moment, your chance to be
who God made you to be.”
When, not if,
the world is hell-bent,
we are formed, knit us together to be,
a person, a people made in the image of
a healing, mending, justice demanding God.
A wiser follower of Christ than I once declared,
that “the glory of God, is the human fully alive.”  (Irenaeus of Lyon)
Being the we, we are made to be,
means practising non-alarm,
practising courage,
practising honesty,
resisting evil and its evangelists,
and instead being the hands and feet, the lips of Christ
when the walls come tumbling down,
standing beside, upholding,
the ones imprisoned, hated, or hurt,
because of the name they wear,
be that name Islam or Israel or Jesus,
they, we, are all God’s own.
If we want to see where God is
in a world hell-bent,
in between the rocks and the hard places,
then look in the mirror.
Look at the person beside you.
Look at your children.
Look at all who don a face mask and pull at the rubble
of the latest disaster in search of life.
Look at all who burn the night-light pushing refugee
paperwork through the machineries of state.
Look at the retiree who drives a neighbour to their doctor’s
appointment.
Look at the seed that sprouts in the ashes.
Look at every dawn, every rainbow.
Look at…every smile, every tear of compassion,
Listen to every voice raised against hatred and bigotry,
Look at every connection of care…..
and there you will see God in Between.
Maybe sometimes that’s not enough for some of us,
but that one, (pointing to the chair/Jesus)
seated under the shadow of his own cross,
that’s what he lived,
that’s what he called the Kingdom,
the Dream of God,
that’s what he’s invites us to do and be.
Don’t be alarmed,
Don’t be deceived.
Be the people of God.